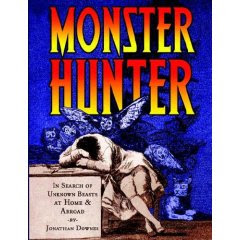 From darkest Devonshire comes a strange tale of distinctly bizarre proportions: namely that of the Hairy-Hands. My good friend, Jon Downes of the CFZ, tells the story of his first exposure to the saga (as a young child) in his excellent book, Monster Hunter: In Search of Unknown Beasts at Home and Abroad.

It was around 1910 that the weird saga supposedly began – on what is today the B3212 road, in the vicinity of the Dartmoor locales of Postbridge and Two Bridges. Somewhat disturbingly, something hairy and unknown would time and again violently lash out at unwary passing drivers, and which, in one case, reportedly even resulted in a tragic death for one unfortunate road-user.
In most cases, victims of the diabolical phenomenon reported large, hairy and ‘disembodied hands’ firmly grabbing the steering wheel of their vehicle – or the handle-bars of their bike - unsurprisingly striking complete terror into their hearts, and which invariably resulted in them being violently forced off the country road. For a decade or so, the events were considered nothing more than a mild – albeit certainly sinister - curiosity for the superstitious locals of Dartmoor. That situation would drastically change in 1921, however.
In June of that year, Dr. E.H. Helby, who was at the time serving as the Medical Officer at the nearby Dartmoor Prison, was tragically killed when he lost control of his motor-cycle and sidecar, in the latter of which were seated his two children. Helby had just about enough time to warn his children to jump to safety – which they did – before he was thrown from his motorcycle and instantly killed.
Then, on the dull, foggy day of August 26 of the same year, a young British Army captain – described as being "a very experienced rider" – was also thrown into the verge of the road, after he too lost control of his motor-cycle. The captain stated at the time: "It was not my fault. Believe it or not, something drove me off the road. A pair of hairy hands closed over mine. I felt them as plainly as ever I felt anything in my life – large, muscular, hairy hands. I fought them for all I was worth, but they were too strong for me. They forced the machine into the turf at the edge of the road, and I knew no more till I came to myself, lying a few feet away on my face on the turf."
And there was much more to come.
In the summer of 1924, the well-known and widely-respected Devonshire folklorist Theo Brown was camping in a caravan, approximately half a mile from the road in question; and, in later life, would detail a particularly nightmarish, and nighttime, encounter that occurred years before.
Brown wrote: "I knew there was some power very seriously menacing us near, and I must act very swiftly. As I looked up to the little window at the end of the caravan, I saw something moving, and as I stared, I saw it was the fingers and palm of a very large hand with many hairs on the joints and back of it, clawing up and up to the top of the window, which was a little open. I knew it wished to do harm to my husband sleeping below. I knew that the owner of the hand hated us and wished harm, and I knew it was no ordinary hand, and that no blow or shot would have any power over it. Almost unconsciously I made the Sign of the Cross and I prayed very much that we might be kept safe. At once the hand slowly sank down out of sight and I knew the danger was gone. I did say a thankful prayer and fell at once into a peaceful sleep. We stayed in that spot for several weeks but I never felt the evil influence again near the caravan. But, I did not feel happy in some places not far off [sic] and would not for anything have walked alone on the moor at night or on the Tor above our caravan."
Sources:
Devon Ghosts, Theo Brown, Jarrold, 1982
Monster Hunter, Jonathan Downes, CFZ Press, 2004
Posted by Nick Redfern at 11:14 AM