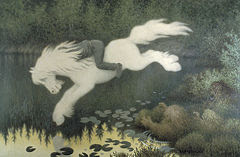 If the British Bigfoot is not a purely physical animal in the sense that we strictly understand the term, but is perhaps far more spectral in nature – as some of the facts, at least, seem to strongly suggest – then how do we even begin to try and explain and reconcile this?

There is one particular avenue that is most definitely worth exploring, and it is an avenue that has its origins buried deep within the history of ancient Scottish folklore. The beast may be what is surely that most dastardly of all creatures: a Kelpie (see the accompanying picture: "Boy on a White Horse" by Theodor Kittelsen).

According to Scottish legend, the Kelpie – or the water-horse – is a wholly supernatural creature that haunts the rivers and the lochs of ancient Scotland and that has the uncanny ability to shape-shift. The most common form that the Kelpie takes is that of a horse – hence the name.

It stands by the water’s edge, tempting any passing and weary traveller that might consider continuing on his or her journey to mount it. That, however, is always the fatal downfall of the traveller, as invariably the beast is then said to rear violently and charge head-long into the depths of the river or loch, and thus drowning its terrified rider in the process.

Very notably, according to the old legends, the Kelpie was also said to be able to transform itself into the form of...a large, hairy man...
Posted by Nick Redfern at 11:24 AM