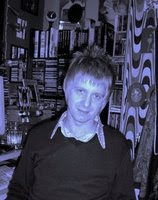 In a new article, Neil Arnold (pictured), author of the cryptozoological A-Z guide titled Monster!, reveals how, back in late December 1981, "a giant, great, growling hairy thing" was seen in London's Hackney marshes by four boys playing in the thick snow.

Precisely what the beast was still remains a mystery to this day. However, the police took the case very seriously: fifty personnel - including armed officers - descended on the scene as they sought to determine the nature of the creature.

Rumors that the beast was a bear gained weight when a number of bear-like tracks were found; there were stories of people running around in ape-suits; and much more of a distinctly weird nature flooded the area - including the revelation that in the previous year, two decapitated bear corpses had been found in the River Lee.

Notably, a mysterious "upright bear" was reported on a number of occasions in 1993 and 1994 in Oxfordshire's ancient Wychwood Forest (for more details, see the article titled If You Go Down To The Woods Today, written by Jan Williams, and published in the July 1994 issue of the Center for Fortean Zoology's magazine, Animals & Men).
Posted by Nick Redfern at 4:52 AM

I'm so glad to find this site! I've always been fascinated by hominids around the world, but a decent UK based site has been a long-time coming. There was a great chapter in Mystery Animals of Britain and Ireland by Graham J McEwan that listed some and I devoured those stories - The Demon in the Stable (Dermot MacManus's childhood encounter) still makes me shudder..

I've flagged it up on my new blog

Many thanks for this, Emma. It's surprising how many accounts there actually are that fall into this "UK Bigfoot" category.