I have come to what some might consider a radical decision! As you may know, I have so many blogs right now that it's sometimes hard to keep track of what's going on and where. So, I am bringing all my current blogs to a halt. I'm not deleting them. But, I am folding them as of today. In their place, I have set up a new blog titled Nick Redfern's Fortean World. Yeah, I know: it's hardly the most original or imaginative title, but it is accurate and to the point! So, from now on, while all my existing blogs will remain archived, here's the address for the new blog, Nick Redfern's Fortean World. As you'll see, the design and style has not been completed yet, and there's no content yet either. But, bear with me, and over the next few days you'll see it start to develop its life and character!
Posted by Nick Redfern at 11:06 AM No comments:

The British Bigfoot - A Lecture 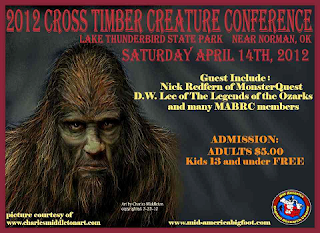 If you're in the area, I'll be speaking about "British Bigfoot" reports at the Cross Timbers Creature Conference in Oklahoma on April 14. Maybe I'll see you there! If you do want to attend, you can find more information right here.
Posted by Nick Redfern at 7:40 AM No comments:

Over at his Gralien Report site, Micah Hanks has an excellent new post on the one angle - more than any other - that many Cryptozoologists don't want to have to deal with when it comes to Bigfoot - the "high-strangeness" cases, such as those where the giant hairy thing seemingly vanishes in the blink of an eye, which is a staple part of many British Bigfoot reports.

Fortunately, Micah does deal with them, and offers an intriguing theory to explain such events...
Posted by Nick Redfern at 10:23 AM No comments:

There's a couple of new posts from me that may be of interest to those following my studies of Bigfoot and/or Wild Men in Britain.

The first is on the Green Children of Woolpit, and the second is on the possibility that Britain's Man-Monkey of the Shropshire Union Canal maybe a Tulpa.

Yep, two totally different topics, but in their own ways, both being relevant to the strange phenomenon of the British Bigfoot!
Posted by Nick Redfern at 7:54 AM No comments:

The Baboon in Britain

Yes, you did read that heading correctly!

Of course, Britain is most certainly not home to wild colonies of Baboon - or, at least, it shouldn't be!

And yet, people see them, and have done so for many a year, from England to Scotland.

That some are of flesh and blood, and others seem decidedly spectral in nature only adds to the controversy - as this new post from me at Mysterious Universe demonstrates.
Posted by Nick Redfern at 8:18 AM No comments: 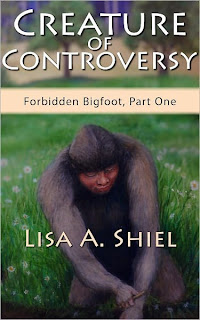 It contains an extensive Q&A with me on my thoughts on what Bigfoot is (and isn't!), the paranormal/Fortean aspects of certain Bigfoot encounters, tales of the British Bigfoot, and much more that will probably not endear me (not that I am already! LOL) to the mainstream field of Cryptozoology!

As an example of the interview with me, here's a taster from it:

Lisa A. Shiel: "What is the biggest controversy in Bigfoot research?"

Nick Redfern: "In my personal opinion, without any doubt, it's why we haven't been able to catch Bigfoot or find a body or any hard evidence—which flies in the face, in my view, of any other animal that doesn't fall in the realm of cryptozoology. When it comes to bears, lions, and tigers, we may find them dead occasionally in the wild or we might find a bear occasionally hit by a truck, but the important thing is that even though it's just occasionally, it does happen. I think this is the biggest controversy with Bigfoot research. Bigfoot, even when it reportedly gets shot, never crumples to the ground and dies. If it unfortunately gets hit by a car, it always manages to escape. Photographic evidence is interesting but never conclusive. Hair samples are interesting but never conclusive. It's this overwhelming, almost eerie elusiveness with Bigfoot that to me is the most controversial aspect. The reason it's the most controversial aspect is because, by default, being so elusive to me implies there's something more—or paradoxically less—to Bigfoot than just being an unclassified animal that science hasn't found our doesn't recognize."

And if that has caught your attention, here's the publisher's blurb on the book:

Is Bigfoot real or a hoax?

For most people, this is the most controversial question surrounding Bigfoot. But to the folks who study Bigfoot—interviewing witnesses, collecting evidence, and analyzing the data—there's no question about Bigfoot's reality. Yet behind the closed doors of Bigfoot research, arguments boil over into feuds worthy of the Wild West.

Now, Lisa A. Shiel invites you to step through the door and learn about the controversies that both enliven and hinder the quest for this mysterious creature:

• What should we call Bigfoot?
• Is Bigfoot paranormal, flesh and blood, or both?
• What on earth is Bigfoot?
• Should we shoot a Bigfoot in order to prove they exist?
• How much do we really know about Bigfoot?
• And much more!

Creature of Controversy exposes the feuds in a no-holds-barred look at the secret world of Bigfoot research, enhanced by interviews with other well-known Bigfoot researchers:

Will the Bigfoot mystery ever be solved, or will infighting block the search? Buy Creature of Controversy today to find out!
Posted by Nick Redfern at 9:14 AM No comments: 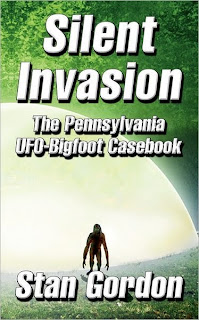 If you have followed the work of researcher/writer Stan Gordon - and particularly so his excellent book, Silent Invasion, which addresses a wealth of truly high-strangeness in relation to Bigfoot - you will want to read this new piece on Stan's work, which provides some excellent insight.

Indeed, I recommend Stan's book to anyone and everyone interested in the British Bigfoot phenomenon.

Not because Stan's book focuses on Britain, but because Silent Invasion demonstrates (as do the actions of just about every British Bigfoot ever reported) that whatever the true nature of the world's hairy man-beasts, they are far more than mere flesh-and-blood apes that science and zoology have yet to classify.
Posted by Nick Redfern at 6:07 AM No comments: