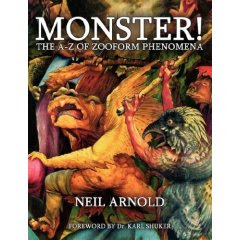 Many thanks to Neil Arnold (author of Monster! - an excellent book that everyone with an interest in cryptozoology should own) for the following report.
As Neil says:
"August (day unknown) 1975 WALDERSLADE, CHATHAM.
"A female witness named Maureen, who was eighteen at the time, was with her boyfriend, late at night, in local woods near Sherwood Avenue. They were chatting and her boyfriend decided to bend down and light a fire. As he was doing so, Maureen saw two glowing points of light just a few feet away that she took to be eyes. They belonged to a hulking, hairy creature that she could just pick out in the darkness, and it stood a couple of feet above her, making this creature around six to seven-feet in height.
"Maureen watched the figure, but was too transfixed to alert her companion, and then, the eyes seemed to lower and the form disappeared behind the undergrowth, but she sensed it was still there, so, without trying to worry her partner, she simply asked to leave.
"She never spoke of the encounter for some thirty years often asking herself afterwards if she’d seen the Devil! Skepticism may arise over such matters but across the UK there are legends of such 'wildmen', and as you will read in other cases from Kent, such glimpses of red eyes and hulking humanoids, albeit scarce, do occur."
Click here for more of Neil's work.
Posted by Nick Redfern at 5:40 AM