MY NEW BOOK: THERE'S SOMETHING IN THE WOODS 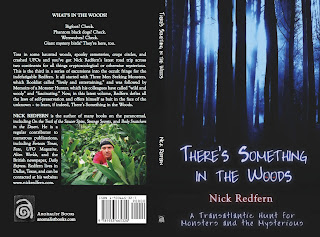 Well, we ended up getting home a bit early from the July 4th weekend; and as this is the same weekend that my new book - There's Something in the Woods: A Transatlantic Hunt for Monsters and the Mysterious - is published, I figured I might as well go ahead and tell you about it now.

Published by Anomalist Books, it covers my cryptozoological investigations and monster hunts that took place over the course of the last two years.
In early 2006, my wife, Dana, and I moved back to jolly old England to live, and remained there until August of that year - after which we returned to sun-drenched Dallas.
So, basically, the book - as its sub-title demonstrates - is a personalized account of the many and varied crypto-driven exploits and adventures that I embarked on in that same period - on both sides of the Atlantic, and sometimes with a bemused and amused Dana along for the ride.
And what, you may ask, does the book contain?
Well, for Anglophiles - and for those of you that regularly check out this blog - you get much on the British Bigfoot; the Werewolf of England's Cannock Chase woods; strange creatures summoned up within the confines of Crop Circles via ancient rite and ritual; the Devil-Dogs of centuries-past; big-cats; giant snakes; and a dizzying array of other beasts.
And States-side, you will will find a wealth of new material on the Thunderbird and other mysterious winged-things; the American Werewolf; Sasquatch; the Texas Goat-Man; monstrous insects; and much, much more.
Expect much more here on the book - and on the data contained in the book on the British Bigfoot, too - over the course of the next few weeks.
Posted by Nick Redfern at 6:51 PM