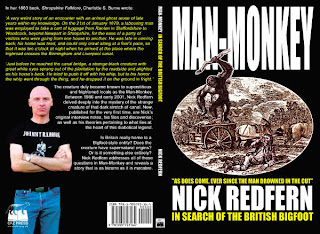 As regular readers of this blog - and of my books, too - will be aware, one particularly strange British-Bigfoot story that has fascinated me for years is that of the so-called "Man-Monkey" of the Shropshire Union Canal.

Indeed, so fascinated am I by it, I even wrote a book about the damned critter!

The story essentially had its origins in 1879, when a man walking home late at night, and with his horse-and-cart in-tow, claimed to have been attacked by a bizarre ape-man style beast with shining eyes that ultimately vanished into the night.

Not only that: the beast was distinctly spectral in nature, as can be evidenced by the fact that the man said that as he struck it with his horse-whip, the whip actually passed right through its hairy body!

More intriguing: sightings of the Man-Monkey have abounded in the area ever since. Indeed, I think my current count of cases, sightings and incidents is upwards of 30 - and which covers the period from the early 20th Century and right up until September 2005.

But now, there is a fascinating development in the saga - and maybe, just maybe, it may open some doors to the question of what the Man-Monkey really was, is, or may have been.

The story comes via Fortean expert and author Mike Dash.

As Dash says, just recently he was leafing through a copy of the December 8, 1878 edition of Sheldrake's Aldershot & Sandhurst Military Gazette, and came across the following story in its pages:

CAPTURING A GORILLA IN SHROPSHIRE

For a fortnight past the district around Madely Wood, Salop, has been in a state of intense excitement, by the alleged depredations committed by a gorilla, which is said to have escaped from a wild beast menagerie travelling to Bridgnorth.

The animal was stated to have first made his appearance in the neighbourhood of that town, where in the darkness of the night it was severally seen by a clergyman and a policeman, both of whom fled.

It is also said to have appeared at several places in the immediate neighbourhood. A few evenings since the occupier of a house in Madely Wood went to bed at a reasonable hour, with the greater portion of his family, leaving his “gude wife” up, who took the opportunity to visit a neighbour, leaving the door open and a candle burning.

Returning in a short time, she was horrified at seeing a bent form, with a goodly array of gray hair around its face, crouching over the expiring embers of the fire, apparently warming itself, the light having gone out.

Too frightened to shriek, she ran to her neighbours, who quickly armed themselves with pokers, iron bars, guns, and pitchforks and other instruments of a similar character, and marched in a body to capture the gorilla.

The form was seen sitting at the fire, but evidently aroused by the approaching body, rose to its full height and revealed the figure of an eccentric character well known in the neighbourhood as “Old Johnny,” who seeing the door open had quietly walked in to light his pipe, accidentally “puffed” the candle out, and was very near being captured, if not exterminated, in mistake for an escaped gorilla.

The animal has not been heard of since.

Well, this is indeed fascinating: the story surfaced only one month before the Man-Monkey was seen - and in the same English county of Shropshire, no less.

And as Mike astutely notes:

"Old Johnny and his humorous encounter make for an interesting story, and it's easy to see why the journalist who wrote the piece focused on him. As published, though, the article ignores the central question of what became of Shropshire's mysterious 'gorilla'. The wild-beast-escaped-from-a-travelling menagerie is a common motif in out of place animal stories, as Mick Goss demonstrated years ago in a Fortean Times article on the mysterious crocodile of Cefn Caves - itself just over the border in north Wales. But it would be an ambitious showman who kept an animal as dangerous as a gorilla in a travelling show."

Indeed, Mike is right: numerous stories, tales and rumors of "circus escapees" (in Britain , in the U.S. and elsewhere) have been trotted out time and again to account for sightings of exotic animals having been seen in areas where they have no business roaming.

A perfect case in point is Britain's big-cats.

For example, in his classic title Cat Flaps, British Fortean author Andy Roberts discussed a wave of "big-cat" sightings in the English county of Yorkshire in the 1980s. One particular series of encounters led one commentator to tell Andy that: "They all come from Knaresborough Zoo, you know."

Of course, there was no evidence at all that the zoo had lost any big-cats - yet such tales and theories often spring up in such situations.

Had someone - or, as the Gazette's story suggests, several people - seen a weird Bigfoot-like entity that was subsequently explained (without any actual evidence to support the notion), as having escaped from a "travelling menagerie"?

Or, incredibly, was the story actually true?

Could there really have been a travelling menagerie from which a gorilla made a successful bid for freedom? And if so, did it ultimately find its way one dark and winter night in January 1879 to the heart of the Shropshire Union Canal, where it scared the you-know-what out of the man who had the misfortune to encounter it?

Could it really be the case that a fully-grown gorilla briefly made its home in the wilds of Shropshire before probably succumbing to starvation and the effects of a harsh winter?

Of course, that would not explain the seemingly spectral nature of the beast reported at the canal - nor would it explain how sightings of the same beast have continued until the present day.

Unless, that is, what people are seeing today could be the ghostly-form of the long-dead gorilla; forever doomed to haunt and wander the tree-shrouded, old canal...

But, bringing animal ghosts into the story is a whole different kettle of fish that I will keep for another day!

Suffice to say for now, however, Mike Dash has made a highly significant breakthrough in a story that - despite its age - never seems to go away.

2. A post on this development at Cabinet of Wonders.
Posted by Nick Redfern at 9:42 AM

Hi Nick, A fascinating account from the newspaper, but such stories and 'legends' seem to exist all over the UK, there is certainly an air of synchronicity about it all. I've recently received a sighting of a tall, spindly creature covered in hair crossing a Kent road, which should be included in the MYSTERY ANIMALS OF KENT book.
However, all these legends pertaining to menageries spilling their contents into the countryside certainly make for intriguing theories, but again, such legends exist all over the world and there doesn't seem to be much evidence to support such escapees.
A gorilla may well have escaped, but wouldn't a creature have easily been recaptured ? Who knows. I'm aware of gorillas escaping in Kent but they werre rounded up. I just think the UK has some kind of embedded, ethereal complexity which throws these kind of forms up. Black hounds, hairy man-beasts, possibly one and the same thing ? Trouble is, it's not as if we can just pack our bags and go and look for one of these things because they are clearly more than flesh and blood forms, but it certainly adds to the wonderful electricity and atmosphere of these strange areas.

Cheers Neil.
I think this story is interesting and significant because it discusses sightings of a hairy man-beast in England only one month before the Man-Monkey was seen, and not too far away either.
But, yep, I will be very surprised if hard evidence of the "circus escape" surfaces...

Nick,
Just a note, if you haven't come across it yourself, there is a backup explanation that is often used. If a convemient zoo or menagerie is unavailable, authorities state that the out-of-place animal must have escaped from the property of a "keeper of exotic animals", who doesn't come forward for fear of legal consequences. Somehow, this person is never identified...

Neil A,
"...menageries spilling their contents into the countryside.." What a wonderful turn of phrase!

Nick
Ah, yes, the exotic animal keeper. If I had a pound or a dollar every time that explanation was used, I'd be a rich man! LOL.

Maybe it's just me, but I AM actually aware of local people who've kept animals, and they certainly aren't the foggy characters Forteana would have us believe. I know of numerous people who kept large cats, but it's unlikely such peiople will come forward to report losing their specimens! However, I do know of people who've kept Barbary apes, lions, puma, leopard, exotic reptiles, strange birds, but I don't think many people would be keeping gorillas.
Menagerists however, WERE in abundance in the 1700s and 1800s but such people and their possible releases cannot explain all the sightings nationwide of gorilla-like forms, especially those which are bipedal with red eyes!! Whoooaaarr!